Intimate letter to Cécile Marianne Dollfus, wife of the journalist Armand Bertin, inquiring after the well-being of her husband and describing a disastrous visit of president Louis Napoleon Bonaparte, the later Emperor Napoleon III, to Mulhouse. Reber had recently returned to live with his family in Mulhouse, leading a "very monotonous life" and working "as much as he can". He confides a lack of self-confidence with respect to his work that has "crept over" him "for some time" and that he still experiences when he imagines that the audience rejects his music. He then discusses the president, who (he says with ironic understatement) had been "moderately satisfied with the reception he received" in Mulhouse. Apart from the "hostile disposition" of a part of the population, there was also "gaucheness" committed by those who "had the best intentions". In an almost comical manner, Reber describes how the national guard arrived too late and played the Marseillaise, at the time considered an oppositional hymn, and that a speech by an industrialist, who believed "to be making the most flattering compliments", was "full of impertinences". As a result, the "unfortunate president was so unhappy with his reception that he departed earlier", cancelling visits to industrial establishments. In turn, the industrialists, including a mutual friend "who expected to be decorated", were furious at the president. In closing, Reber mentions that he has started to read Armand Bertin's "Journal des débats", not so much for an "interest in political affairs" but in order to "find a reflection of something" that reminds him of his friends.

Reber returned to Paris sooner than he might had expected, as he was made professor of harmony at the Paris Conservatory in 1851. In 1862 he succeeded Fromental Halévy as professor of composition.

Traces of folds. With very light foxing and traces of an old repair. 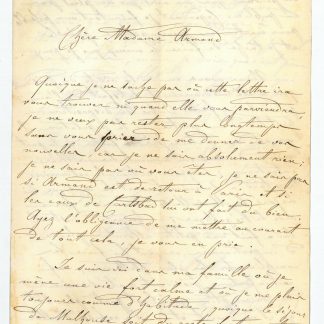