[Navigation - Red Sea - Navy Pilot]. Red Sea and Gulf of Aden Pilot Comprising the Suez Canal, the Gulfs of Suez and Aqaba, the Red Sea, the Gulf of Aden, the South-East Coast of Arabia from Ras Baghashwa to Ras Al Hadd, the Coast of Africa from Ras Asir to Ras Hafun, Socotra and its Adjacent Islands.

With: [Navigation - Red Sea - Navy Pilot]. Supplement No. 7 - 1977 to Red Sea and Gulf of Aden Pilot (11th edition, 1967) corrected to 4th March, 1977. Whenever reference is made to the pilot this supplement must be consulted. London, United Kingdom Hydrographic Office, 1977. With 2 folding maps (double-sided on the same leaf) and 4 views of coastal profiles on 3 pages. Grey/blue back wrapper; the two quires, map and back wrapper are held together by two metal staples.

The essential standard sailing directions for the Red Sea and Gulf of Aden, corresponding with zone NP64 on the official Admiralty charts. These nautical works - the pilots and the charts - are published by the United Kingdom's Hydrographic Office, which provides necessary hydrographic and marine geospatial data to all kinds of maritime organisations across the world. The publications are not only used by the British Royal Navy, but can also be found on board the majority of international merchant ships. The data provided in the pilots and other publications are compliant with SOLAS (the Safety of Life at Sea treaty) guidelines and are updated constantly in weekly "Notices to Mariners", and in supplements to and new editions of the pilots whenever necessary.

The present copy is the 11th edition (1967) of the pilot with sailing directions and other information on the weather, currents, radar ranges etc. relating to the Red Sea and Gulf of Aden, including the supplement issued in 1977. It includes a foreword by the Hydrographer of the Navy, Rear-Admiral George Stephen Ritchie (1914-2012), who served most of his Naval career in the Surveying Service providing the raw data for the Hydrographic Office. The introduction clearly states that with the publication of this volume the previous edition and its supplements are cancelled, since the most up-to-date information has been compiled in the new edition and the weekly "Notices to Mariners" that appear after the publication of the 11th edition. The 11th edition of 1967 and its 1977 supplement were made redundant with the publication of the 12th edition in 1980. Each subsequent edition of the pilot supersedes the last, which have appeared infrequently depending on newly available information since the mid-19th century until the present day.

Binding slightly rubbed and faded, first two pages are printed on red/pink paper, edges of the volume are very slightly soiled. Fore-edge of the supplement is slightly frayed. Overall in good condition. 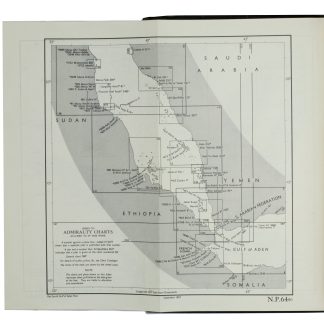