To his lawyer Johannes Roede (1875-1958), brother of the pianist and collector Halfdan Nobel Roede, concerning Munch's financial problems and poor reputation. In the letter on stationery from a hotel in Opdal, Munch complains about his financial difficulties despite his owning several apartments. He contemplates renting or selling his properties in order to be able to afford moving.

The letter on Gothenburg hotel stationery is no less pessimistic. Munch explains that his property in Ekely, which he bought in 1916 for 55,000 crowns, had been overpriced, as his childhood friend, the architect Henrik Bull, estimates that it is worth hardly more than 60,000 crowns so many years later. In addition, Munch relays a conversation with Jens Thiis, the director of the National Gallery in Oslo, centered around his poor reputation. Apparently, Munch was perceived as primarily concerned with letting his properties, while supposedly neglecting his paintings, which he is said to keep in bad condition.

On stationery of the "Opdal Turisthotel" and the "Grand Hôtel Haglund" in Gotheburg. Traces of folds and buckles. The letter from Gothenburg with minor tears to the upper margin. Includes an autograph envelope by Johannes Roede's wife Ellen. 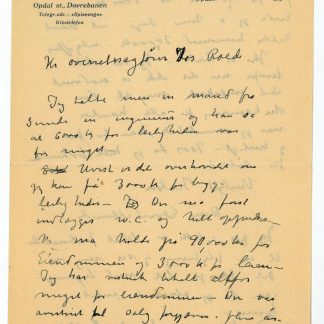