Portrait of the Swiss publisher Albert Skira (1904-76), dated and inscribed with the dedication: "Pour ces 25 ans d'éditions et 30 Ans d'Amitié. Picasso". The expressive profile of Skira, including parts of his shoulders and one arm, is representative of Picasso's sketchy and graphic art oriented late style. It is the last of seven numbered portraits of the publisher that Picasso drew on the evening of 16 September 1953 in the booth of a restaurant in Golfe-Juan.

Skira "played an important role in Picasso's life in that in the fall of 1930 he commissioned him to illustrate Ovid's Metamorphoses. Picasso achieved surrealist transformations in an admirably classical graphic style [...]. This was one of the reasons that led Vollard to commission him to produce what was to become the Vollard Suite. Skira subsequently offered him another opportunity by creating, in 1933, the splendid magazine 'Minotaure': for the cover of the first issue, Picasso created a virtuoso collage" (cf. Pierre Daix, Dictionnaire Picasso).

With original fold mark and insignificant tears in the fold. An unrelated note in ink on the verso reads: "Vauthier baryton". 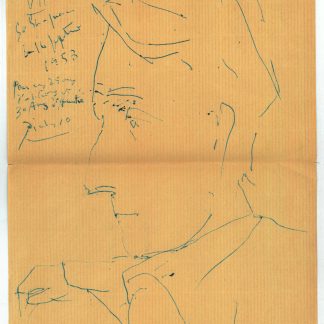