In French to his friend, the collector Victor Chocquet (1821-91), sending greetings to Choquet, his wife, and Paul Cézanne, complaining about the influx of western painters to Algiers and indicating his current address: "If you see Cézanne, a good handshake. I work a little. I will try to bring back figures but it is increasingly difficult, too many painters in Algiers".

Chocquet had discovered Renoir in the late 1870s and commissioned several paintings - an important development in the artist's career. Renoir's visits to Algeria, Spain, and Italy in 1881/82 mark the beginning of his shift toward post-Impressionism. The trip to Algeria in particular was inspired by Eugène Delacroix.

Traces of folds. With a minor tear. 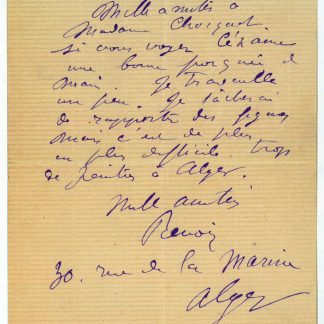