An antique map of the upper portion of the Red Sea, referred to on the map as the Sea of Arabia, stretching from the western Gulf of Aden to central Eritrea. This region, one of the most important shipping lanes in the world, also includes parts of the modern-day nations of Yemen, Djibouti, and Somalia. The work was originally included in Karl Müller's "Geographi Graeci minores", along with many other maps of the region.

The map is highly detailed, showing many settlements, mountains, wadis, and more. Most interestingly, Müller provides Ptolemaic coordinates for some of these features, and the map credits Agatharchides, Arthemidorus, Pliny, and Ptolemy as its sources. Place names given range from Arabic to Greek. Seven inset maps are provided, including one showing the full Red Sea. The map also includes a view of the "Pic de Bab-El-Mandeb" (the "gate of tears"), a mountain which lies above the straits at the entrance to the Red Sea. 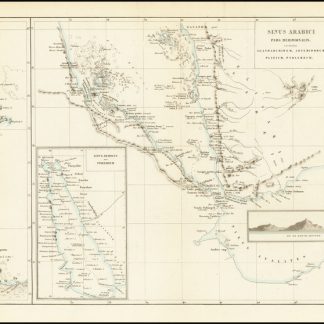