Pretyman, Herbert Edward. Journal of Herbert Edward Pretyman. Written During his Expedition to the Kittar Mountains, Between Kenneh (on the Nile) and the Red Sea, 1891.

[London], printed for Private Circulation Only, 1892.

4to. VI, 50 pp. With a portrait frontispiece of the author, from a photograph, 34 other photographic illustrations on plates, and a double-page sketch map of the Kittar Mountains. Publisher's purple cloth, blocked in black and gilt with ibex and palm tree. All edges gilt.

First edition. Extremely rare example of this journal which covers Pretyman's 1891 hunting expedition to the Kittar mountains, the Eastern Desert of Egypt between Qena on the Nile and Quseer on the Red Sea, using the only known map of the area produced by Floyer four years earlier. H. E. Pretyman, a lieutenant in the Grenadier Guards, travelled back from Ismalia to London in 1891 but died the same year, whilst Camp Adjutant at Bisley, and it is believed he had not fully recovered from a severe attack of typhoid and jaundice in 1889. His father, the Rev. Frederic Pretyman, arranged to have the journal published as a memorial volume.

Extremeties insignificantly rubbed, light brownstaining or foxing to a few places in the first and last few leaves. An excellent copy. 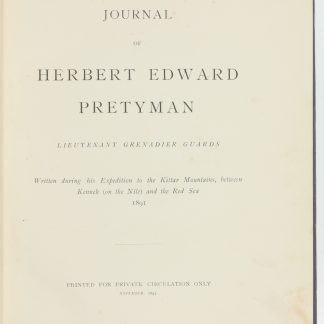 Sie sehen: Pretyman, Herbert Edward. Journal of Herbert Edward Pretyman. Written During his Expedition to the …London, 1892. € 3.000,00
In den Warenkorb