Second edition. Crucial brochure on capitalism and agriculture in the United States based on the U.S. Census reports for 1900 and 1910. In this study "Lenin focused on black sharecropping in the American South to suggest that the American path of capitalist agriculture, which he had advocated less than a decade earlier, also contained authoritarian, even 'feudal' elements. After the American Civil War, Lenin noted, the American bourgeoisie restored 'the most shameless and despicable oppression of the Negroes' within 'free, republican-democratic capitalism'" (Zimmerman).

Written in 1915, Lenin, whilst in Berne, sent the manuscript to Maxim Gorky for the Parus Publishers in 1916, but it did not appear at that time: instead, it was published in Petrograd in 1917 by Zhisn i Znaniye. Lenin did not realize his intention of writing a second part of the book, which was to have dealt with Germany.

Tear to front wrapper; flaws to margins of pp. 21-24 (no loss of text); evenly browned throughout. A very good copy of this important work. 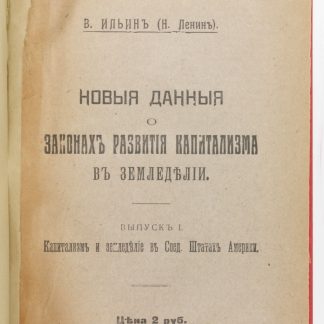