"The criticism of materialism is excellent"

8vo. 2 pages on paper with perforated upper margin. In Russian. With one enclosure.

To the unnamed philosopher Pyotr Petrovich Nikolaev in response to Nikolaev's new book. Tolstoy has read Nikolaev's book, and writes with a critique: "There is a lot of very good material in it, but you did well not to release it, and to want to work on it some more. The criticism of materialism is excellent, but you have not clarified what we feel and call matter. I think that there are other spiritual essences in which, just as in us, the basic essence (God) manifests itself partially, limitedly [...] / The book, as it is now, has merits [...] but the subject is so important that one cannot treat it seriously and attentively enough. / It is a shame that you live abroad [...]" (transl.).

P. P. Nikolaev (1873-1928) was philosopher and Tolstoyan who published a number of works in defence of freedom of religion. He was forced into exile in 1904, and lived in Nice from 1905 onwards. Tolstoy corresponded frequently with Nikolaev and engaged closely with his works - indeed, one of his last diary entries refers to reading one of his books. The work Tolstoy comments on in the present letter has not survived in the Yasnaya Polyana library, but may have been "Poniatie o boge kak o sovershennom sodanii" ('The Concept of God as the Perfect Basis of Consciousness', Geneva, 1907), which attempts to elucidate Tolstoy's ideas of God and the soul.

Enclosed is a letter to Nikolaev from Tolstoy's friend and editor V. G. Chertkov from 20 January 1903, encouraging him to send the manuscript of an article for Tolstoy to comment on (4to, ¾ page).

Published on the basis of the retained copy in copy book 7, fol. 392f. 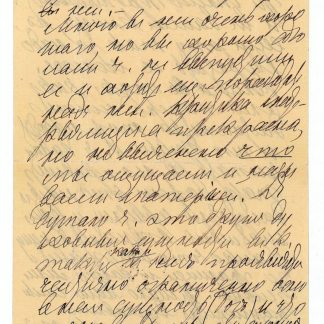