Correspondence with his editor Robert K. Spencer at Appleton-Century-Crofts concerning several projects. In the earliest letter, Simenon thanks Spencer "for the good news about the successful career of 'Trois Nouvelles de Georges Simenon' [...] and of 'Tournants Dangereux'". The latter title was published as early as 1953, whereas the three novels appeared in 1966, both in French and for an American audience. He expresses his hope that Spencer "will find some suitable material in 'La Rue aux Trois Poussins'" for another anthology but concedes that he has not written any novels in twenty years.

In February 1969, Simenon asks for an author's fee of "10% of the volumes sales price" for "various short stories" appearing in a textbook. Simenon also informs Spencer that he cannot extend his "field of action to all English speaking countries of the world", referring specifically to "the British Empire" and Canada, which shall remain "an open market".

The third letter was sent with a contract "reflecting our recent correspondence", asking Spencer to return it signed. Simenon hopes that "the new anthology will have the success of the previous textbooks".

The two letters from 1969 with recipient's notes in ballpoint pen and pencil; the letter from 20 February 1969 with a minor tear to the upper margin. Well preserved. 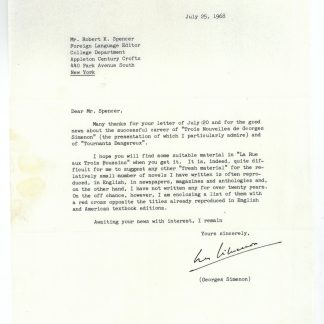