Rare émigré edition of this most notorious of anti-semitic slanders. This edition is particularly remarkable for its direct link to the predominantly Jewish make-up of the new Bolshevik government, as illustrated on the front cover: the mounted photogravure, "taken in 1918 and forbidden in the USSR under threat of execution", shows the "Jewish government in Russia" with Leon Trotsky in the front row.

The text of the 24 'protocols' originates from Nilus's 1911 edition, with the addition of an extensive introduction by the publisher, Duke Mikhail Gorchakov. The 'Protocols' are an antisemitic hoax purporting to describe a Jewish plan for global domination. It was first published in Russia in 1903, later translated into multiple languages, and disseminated internationally in the early part of the 20th century. The text allegedly documents the minutes of a late 19th century meeting of Jewish leaders discussing their goal of global Jewish hegemony by subverting the morals of "gentiles", and by controlling the press and the world's economies. Following the October Revolution, the 'Protocols of Zion' came to be seen in a new light by the Russian right. Viewed through the prism of their anti-semitic beliefs, the predominantly Jewish make-up of the new Bolshevik government appeared to provide material proof of the prophecies that the text had purportedly first revealed. In the 1930s it was proved that the source material for the forged text consisted jointly of the "Dialogue in Hell Between Machiavelli and Montesquieu", an 1864 political satire by Maurice Joly, as well as a chapter from "Biarritz", an 1868 novel by the antisemitic German novelist Hermann Goedsche. 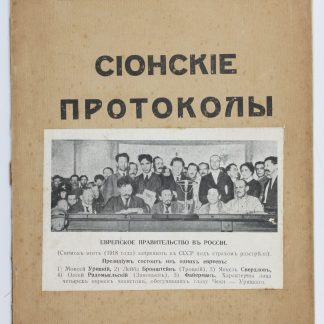