The first report on the Royal Cache

Rare first edition of the first report on the Royal Cache, an ancient Egyptian tomb near Deir el-Bahri in the Theban Necropolis, officially discovered in 1881. Including 20 impressive photographs of sarcophagi and mummies, this account convinced authorities to expand the Boulaq archaeological Museum.

The cache at Deir el-Bahri was first discovered in 1871 by the Abd el-Rassul brothers, who ended up selling items from the tomb on the black market. Eventually the Director of the Boulaq Museum, Gaston Maspero, who had succeeded Auguste Mariette in 1881 as director general of excavations and antiquities for the Egyptian government, became suspicious and had two of the brothers arrested. One of them revealed a tomb secreted in a cliff near Deir al-Bahri. Upon arriving on-site, the delegation of the Museum discovered an extraordinary collection of mummified remains and funeral equipment of more than 50 kings, queens, and other members of the royalty (including the mummies of Thutmose I and Ramesses II), suggesting that the tomb was used for safekeeping royal mummies during the Twenty-first Dynasty. In only 48 hours the entire cache was cleared and all contents, including the mummies, were transported to Luxor and then Cairo. The present work constitutes Maspero's first study of the objects. It served as the basis for a more elaborate study of the findings he published eight years later ("Les Momies royales de Deir-el-Bahari", Paris, 1889).

Extremities somewhat rubbed, occasional light foxing. A pretty copy. Rarely seen at auction. Provenance: from the private library of the American diplomat and collector Elbert Eli Farman (1831-1911), Consul General of the US at Cairo from 1876 to 1881, with his bookplate to the front pastedown. 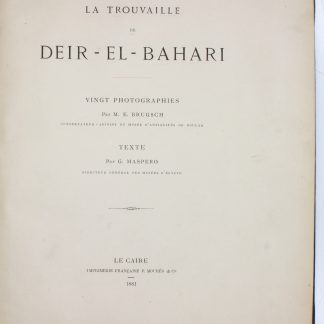