4to. (10), 496 pp. Original half cloth with spine-title stamped in silver. Original dust jacket illustrated by Stephen Perringer and designed by Paul Gamarello.

Source material for the 1997 film of the same title, directed by Curtis Hanson and starring Kevin Spacey, Russell Crowe, and Kim Basinger alongside a star-studded cast. The film was a major commercial and critical success, grossing over $126 million worldwide and garnering nominations for nine Academy Awards, of which it won two. The film is one of only three films in history to sweep the "Big Four" critics awards (National Society of Film Critics, New York Film Critics Circle, L. A. Film Critics Association, and the National Board of Review), along with "Schindler's List" (1993) and "The Social Network" (2010). 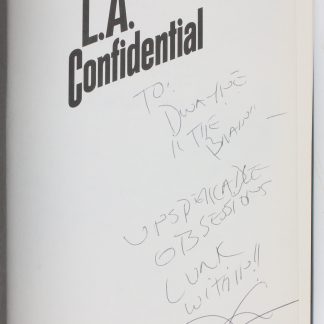