An interesting album recording the construction of new British military barracks at Abbassia, Cairo, shortly before World War I. Compiled by James Frazer Annan (1887-1957), a British engineer working for the contractor Henry Lovatt Ltd. in Abbassia between 1910 and 1913. Some 40 photographs depict construction at its various stages, showing workers and equipment, including a concrete mixer, details of walling blocks, column caps and shells, scaffolding, and a consignment of cement, as well as a panoramic view of the construction site from July 1910.

Other images show memorable events including the coronation ceremonies for King George V in 1911, Lord Kitchener presenting prizes at a Rifle Meeting, and the Mahmal passing through Cairo during the annual pilgrimage to Mecca. City views of Cairo and Heliopolis, street scenes "in the Mousky district" and "among the Bazaars", the Eshekieh Gardens, the Pyramids, the Nile barrage and dam, tombs of the Khalifs and "typical Mosque tombs": A few more personal scenes such as Christmas dinner 1910 and a picture of baby "James junior" complete this appealing collection. 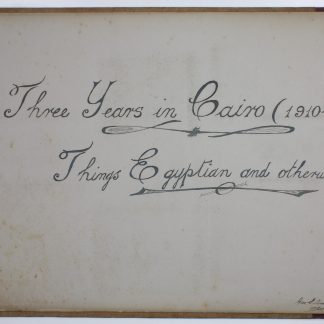