A detailed war-time newsletter from the Middle East, relaying through the soldier's wives at home the regiment's movements at the front for family members back in the UK. Covering August 1942 to March 1943, it focuses on general updates of the regiment's position and provides lists of soldiers, facts which would give some comfort to their families. Whilst there are humorous bits on the trivialities of warfare, the confidential nature and redacted passages remind the reader that this was an internal communication with the bare minimum of information allowed.

The letter starts with addresses which a reader would need to write to for inquiries as to whether family members had been wounded or captured as prisoners. It then proceeds into "regimental letter number 1", which describes the regiment boarding a steamer and at sea; the typical routine is portrayed as a "wild rush to get the mess deck clean, hammocks and mattress stacked, blankets rolled and so on before breakfast" (p. 3).

The 2nd letter commences with 8 Dec. 1942, making reference to landing in Egypt and preparations for fighting Germany. In the same format as the first letter, it is followed by a battery notes section, listing ill or other soldiers who had to remain at HQ, promotions, soldiers injured and casualties sustained from the fighting.

A humorous note concerns an incident involving poisonous creatures of the desert, where "Battery Commander was dragged from his bed to take L/Bdr. Tait to the M.O. for treatment for scorpion sting. The scorpion, later in the night, was captured alive [...] and severely dealt with. Bdr. Hood G's scorpion sting turned out to be a piece of sardine tin, and it's thought that the piece of hand grenade alleged to have fallen on Gnr. Elliot's truck may have been the remainder of the tin" (p. 10). As discussed at the end of the letter, the paper rationing introduced in the UK meant that "it will be impossible to make the future circulation of these letters as wide as it has been" and that in the future a lady in each area of the UK would pass a single letter around for the families eager to find out about the loved ones on distant shores.

Some spotting and staining with a 3 cm tear along the central hold line to some pages. In good condition for a fragile letter. 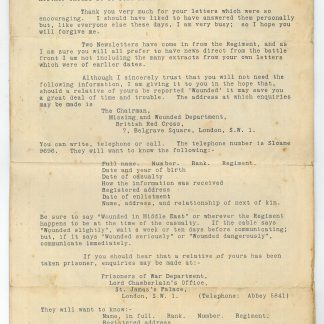