"The idea of a nation is not what it thinks of itself in time, but instead what God thinks of it in eternity" (p. 6). Solovyov (1863-1900) was one of the greatest religious and political thinkers of 19th century Russia, a poet and mystic. In the 1880s he sought to revive the mystical-gnostic elements in the Russian Church, yearning for the spiritual nature of the world and universal religion. Solovyov never broke up with Orthodoxy but he promoted the reunification of the Russian Orthodox and Roman Catholic Churches.

Though an intimate friend of Fyodor Dostoevsky, Solovyov was highly critical towards the Dostoevsky's nationalism, shrewdly observing that "national self-consciousness is a great thing, but when self-consciousness turns into complacency, and complacency into self-admiration, it can only end in national self-destruction". He enjoyed little success in Russia, where he had to struggle against Tsarist censorship, nor did his ideas encounter much appreciation when he visited Paris in 1888. However, Solovyov's ideas would be of great importance for the Russian spiritual renaissance at the beginning of the 20th century. During the Soviet regime his works were forbidden. 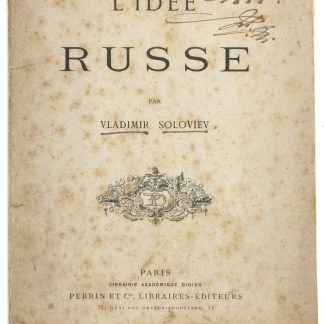