4to. 3 lines on the title-page of the "Musée Africain" catalogue. Mounted on backing paper.

Belot's play "La Venus Noire" premiered at the Théâtre du Châtelet in 1879. The present catalogue refers to an "African museum" installed in the theatre lobby, to be explored before and after the show. It featured kitchen utensils, toys, weapons, fetishes, fabrics, masks, maps and stuffed birds from "black Africa". The theatre gave out programmes and auctioned off the artifacts after the last show.

As a pencil note on the reverse suggests, the narrowliy trimmed backing paper appears to be have been previously used to hold an autograph of Sir James W. from a journey to South Africa. 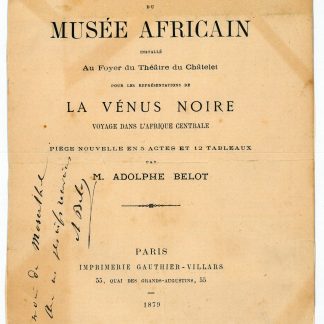