[Album amicorum - Emperor Hirohito]. Friendship album with 69 entries realised in Klecksography, by rulers and members of ruling families, politicians, and other notable persons, including Emperor Hirohito of Japan.

An important and highly interesting Italian friendship album assembled between July 1919 and June 1924, realized in Klecksography throughout, by folding in half the signatures while still damp to create symmetrical ink blots, similar to the one used for the Rorschach test.

Among the personalities here represented is Emperor Hirohito, who visited Italy accompanied by his uncle, Prince Kanin Kotohito, during a six-month state visit to Europe before assuming the regency of Japan in November 1921. The album also contains also a series of signatures collected in Fiume (Rijeka) in August 1920, at the height of the Italian Regency of Carnaro, including Gabriele D'Annunzio himself as well as Sante Ceccherini, Viganò, the commander of the defected destroyer Espero, and other legionaries and military heroes. The collection further comprises members of the Italian royal family, represented almost in its entirety, and the ministers of Mussolini's first government, including Costanzo Ciano, Armando Diaz and Giovanni Gentile. 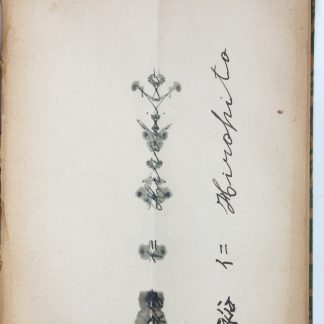