A splendid album of original artwork by some of the foremost artists of the Franco-Belgian comics scene active during the early 1990s. The contributions, some of which are located and dated, would seem to have been collected at various comics fairs or events. Virtually all are inscribed to "Jean-Michel", also variously spelt "Yann Mikael" or similarly, suggesting - as do the frequent maritime subjects - that the collector hailed from Brittany, probably from Saint-Malo, where numerous entries were acquired.

Among the still-active luminaries of the medium's Golden Age are Morris (with a portrait of Lucky Luke) and Tabary (who draws Calife Haroun el Poussah, known in English as Haroun El Plassid). Jidéhem draws Gaston (on which strip he long collaborated with Franquin), and Albert Weinberg draws his character Dan Cooper. Marcel Uderzo, Albert's younger brother and sometime collaborator on the original Asterix albums, draws his own character Mathias. Others have taken over the torch from famous predecessors: Al Coutelis draws a spoof of Tanguy and Laverdure, a famous strip he inherited from Albert Uderzo; Jean-Claude Fournier draws Spirou, which character Franquin handed over to him as early as 1970. A portrait in fineliner and broad felt-tip is contributed by André Juillard, who would later take over Edgar P. Jacobs's Blake and Mortimer - a series in which Didier Convard, seen in another entry, would also have a hand, in collaboration with Juillard. Jacobs himself is obliquely present in the portrait of his villain Olrik, drawn by an unidentified contributor, while Jean-Charles Kraehn represents Saint-Malo's very own "bande dessinée" scene.

A few double-page spreads (21, 114). Occasional light offsetting to opposite page or bleeding to next, especially from felt-tip drawings, but on the whole perfectly preserved. A few blank pages serve as protective tissue guards. A complete list of contributors, all but a dozen identified, is available upon request. 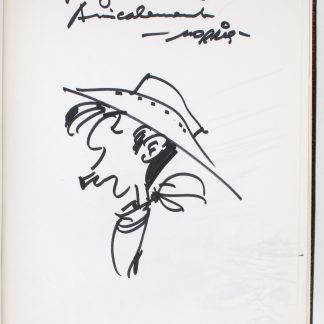