4to. Italian manuscript on paper. ½ p.

The premise of this unpublished eulogy for Clement XIV (1769-1774) is a comparison between the Pope and the hero Rinaldo in the enchanted forest, the most famous episode of Torquato Tasso's "La Gerusalemme liberata" with the Jesuits serving as his foe. Clement is "greater than Rinaldo and strong and brave / Inspired by heaven, supreme sheperd" who "smashed the Ignatian branch to the soil".

On 21 July 1773, Clement XIV issued the papal brief "Dominus ac Redemptor Noster" ordering the suppression of the Society of Jesus. This was probably the most controversial political decision of the 18th century, leading to a surge of propaganda for and against the Jesuits and the Pope that culminated after Clement's death on 22 September 1774. 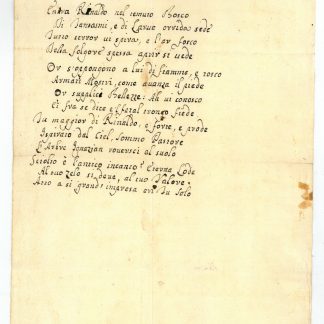