First edition, rare. Comprehensive study of antiquities of western India by the leading 19th century archaeologist in this field. This seminal work is particularly interesting due to the large number of excellent original albumen prints of the most prominent excavation sites, including the Junagadh Caves, rock excavations in the Uparkot, the great cave at Talaja, the Temple of Neminatha, and Maiji Sahiba's tomb. The final leaf of text lists 29 "extra Photographs illustrative of this Report [which] are not published, but the negatives are deposited at the India Office." The present copy includes this additional suite of images. In addition, numerous lithographed plates display coins, inscriptions, excavation plans, and floor plans of temples, as well as drawings of architectural details such as pillars and capitals. 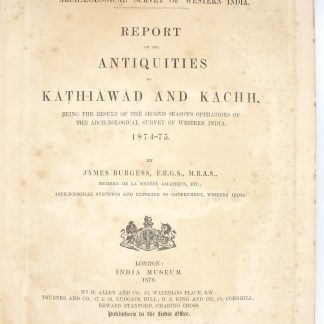