Nautical chart of Kamaran Island and Kamaran passage in the Red Sea, prepared by the British Admiralty. With an inset map of Kamaran harbour.

During the second part of the 19th century, Kamaran Island was occupied by the Ottomans, who built a quarantine station for pilgrims from East Africa, the Gulf, India and the East conducting the Hajj by sea to the Ottoman-controlled holy city of Mecca. The chart details the quarantine area on the island, labelling quarantine buildings and the quarantine anchorage. Among the most prominent labelled places are Ras Rasha, Ras el Yemmen, Ras el Bayádh, and Saliff. Other details include Risha Island with a coral-free spot marked "good landing", as well as a warning of buoys adrift in the Kamaran passage.

The British Admiralty has produced nautical charts since 1795 under the auspices of the United Kingdom Hydrographic Office (HO). Its main task was to provide the Royal Navy with navigational products and service, but since 1821 it has also sold charts to the public. The present chart was composed after Admiralty surveys in 1899; it was first published in 1900 and saw several corrections up to 1919.

With a single fold. Captioned in a former collector's hand on verso. Two small marginal tears. 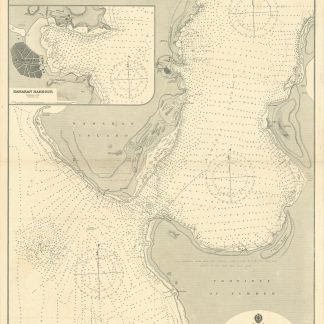