Detailed nautical chart of the port of Aden, historically a major hub of transportation for the region, prepared by the British Admiralty. Undoubtedly one of the better antiquarian maps of Aden under British administration.

The chart details the port area, labelling the Hotel de l'Europe, churches, the post office, the American Consulate, Cunningham market, the Prince of Wales pier, coal wharfs and the Aden Coal Company, as well as Marbut Hill, Chapel Hill and Barrack Hill. It includes the mountainous Aden Peninsula and Gold Mohur Valley, as well as the quarantine station on Flint Island.

The British Admiralty has produced nautical charts since 1795 under the auspices of the United Kingdom Hydrographic Office (HO). Its main task was to provide the Royal Navy with navigational products and service, but since 1821 it has also sold charts to the public. The present chart was composed after Admiralty surveys between 1906 and 1936; it was first published in 1907 and saw several corrections up to 1937.

With a single fold. Captioned in print and in a former collector's hand on verso. Slightly brownstained near upper right corner and on lower right margin. 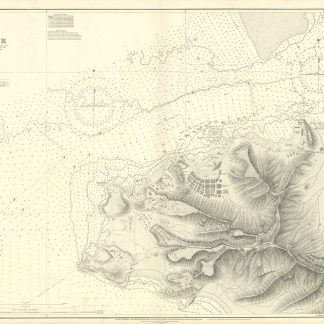