Very rare restricted British Army manual, dealing with the terrorist explosive devices and methods employed by the Zionist insurgents during their paramilitary campaign carried out against British rule in Mandatory Palestine. Includes instructions how to detonate various types of mines and booby traps, as well as a history of terrorist activity in 1946 undertaken by Jewish groups. Plates of various attacks are included, such as the partially destroyed King David Hotel in July 1946, and the demolished building in the David Quarter, Jerusalem, bombed in November 1946. Of that attack the booklet reads, "This incident is included for its illustration of the extreme methods which Jewish Terrorists may employ when planning deliberate murder". 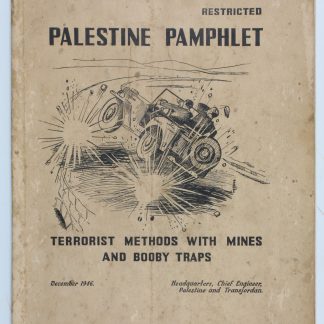