Painting of a Grey Arab stallion standing in the tropical sun

Fine original oil painting by the aristocratic Polish painter Wojciech Kossak (1856-1942): a grey Arab stallion standing near an oasis with palm trees, with a mosque in the background; within a contemporary ornamented gilt frame. Wojciech Kossak was a Polish painter of portraits and historical scenes, including battle scenes, illustrating and depicting the history of Polish armed struggle and notable Polish battles of Central and Eastern Europe against the foreign oppressors, especially the period of the Napoleonic wars and the November uprising. Among his most famous paintings are "The Raclawice Panorama" (1893-94) and the battle at the Berezyna (1895-96). He was member of the celebrated Kossak family of painters and writers, the son of painter Juliusz Kossak (1824-1899), the twin brother of freedom fighter Tadeusz Kossak, and the father of painter Jerzy Kossak (1886-1955). Wojciech Kossak's historical painting was very different in style and subject matter from that of his predecessor Jan Matejko. Kossak belonged to a new generation of Polish battle-scene artists influenced by the work of his father Juliusz. His development to a more 'impressionistic' style during his later years is beautifully demonstrated in this painting of a proud grey Arab stallion firmly standing on a sandy ground on which the oriental high sun throws its short shadow, near an oasis with palm trees and in front of a reddish mosque, surrounded by a fortified wall. 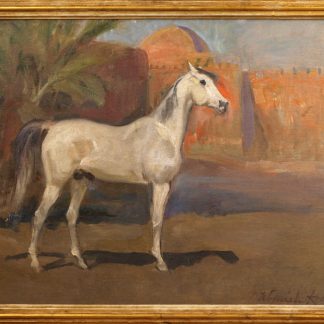