As one of the earliest examples of a popular publication of Fontenelle's eulogies (preceded only by a 1731 Hague printing), the work is an important symbol of what today is seen as Fontenelle's primary accomplishment: while history has smiled on men such as Marsigli and du Verney, it is often forgotten that it was due to works like Fontenelle's, which heavily publicised their achievements to a popular audience, that they are remembered and acknowledged today. "It was Bernard Bovier de Fontenelle (1657-1757) who by his eulogies of scientists first bridged the gap between the scientific communities and the world at large [...] the éloges of the old Academy of Sciences acquainted laymen with a discipline that was at once esoteric by its novelty and forbidding by its terminology and methodology. Hence the éloges, aside from the other functions they performed in the service of science, also served as a public relations organ in the same manner as journals, textbooks, public lectures, literary dialogues, scientific expositions, and cabinets de physique and d'histoire naturelle" (Paul, Science and immortality: the éloges of the Paris Academy of Sciences, pp. 1-2). 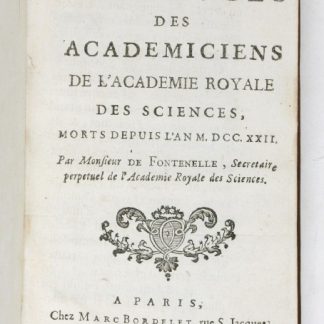