Teonge, Henry. The Diary of Henry Teonge, chaplain on board His Majesty's ships Assistance, Bristol, and Royal Oak, anno 1675 to 1679.

The fame of the English clergyman Teonge (1621-90) rests on his present work. Due to financial difficulties, he enlisted in the Navy and became a chaplain on the ships Assistance, Bristol and Royal Oak, completing three voyages to the Mediterranean, where he searched for pirates, landed in Syria and visited Malta, Zante, Cephalonia, and Aleppo.

"The interest of Teonge's life is concentrated in the diary of the few years he spent at sea, which gives an amusing and precious picture of life in the navy at that time. This journal, from 20 May 1675 to 28 June 1679, having lain in manuscript for over a century, was purchased from a Warwickshire family by Charles Knight, who edited it in 1825 as ‘The Diary of Henry Teonge,’ with a facsimile of the first folio of the manuscript (London, 8vo). The narrative reveals the diarist as a pleasant, lively, easy-going man, not so strict as to prevent his falling in with the humours of his surroundings" (DNB). The diary contains accounts of cruises in the Channel, Atlantic, and Mediterranean, leavened with occasional songs, sonnets, acrostics, etc. "The nature of Teonge's diary, and the disappearance of the manuscript for almost a century after its first publication in 1825, led to persistent suggestions that it might have been a forgery. Confirmation both of Teonge's existence and of the sequence of events which he recorded came from the Admiralty records in the Public Record Office, and the re-emergence of the manuscript itself at a Sotheby’s sale in 1918 put the matter conclusively to rest" (ODNB). 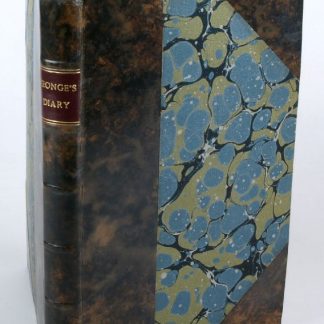 Sie sehen: Teonge, Henry. The Diary of Henry Teonge, chaplain on board His Majesty's ships Assistance, …London, 1825. € 500,00
In den Warenkorb