[Shipwrecks - Northumberland]. "Protest of John Harvey & Dan. Lamond, for the loss of the Ship Cargo." ADS.

Statement made by the two shipwrecked Aberdeen mariners John Harvey and Daniel Lamond before George Boyd, the Notary Public of Sunderland, detailing how they lost their vessel and cargo off Sunderland Pier in a storm: "[...] these Appearants set sail with the said ship [the 'Peggy'] from Alemouth in Scotland [i.e., Alnmouth, Northumberland] on the 27th Day of September instant about one o'Clock P.M. staunch and in good Condition, and well manned, with a Cargo of Wheat on board, and proceeded with the said Ship to Newbiggen in the County of Northumberland, when about 4 o'Clock P.M. the Sea raged very high, and the said Ship sprung a Leak [...] the water still increasing upon them, they could with the greatest Difficulty keep the said Ship above water; - when the said Ship arrived off Tynemouth Castle, these Appearants let go the Anchor of the said Ship, but the Sea, still continuing to rage with great violence, they were under the Necessity of cutting the Cable [...] these Appearants endeavored to run the said Ship for Sunderland Harbour, (they not being able to get the said Ship into Shields Harbour) but when they arrived off there (viz. about 5 o'clock A.M.) there was six feet of Water in the Hould and these Appearants finding it impossible to keep the Ship above Water any longer, were under the Necessity of running her on Shore on the South-side of Sunderland Pier, in order to save their lives [...]".

While little is known of John Harvey, Daniel Lamond later entered the Royal Navy and died in the Battle of Copenhagen on 2 April 1801, one of the nine officers and 103 men of Captain James Walker's "Isis" killed or wounded when Rear-Admiral Horatio Nelson's fleet defeated the Danish-Norwegian fleet.

Folded and with three drystamps (6d, 6d, 1s) and 8d stamp. Seal cracked. Signed by both mariners and the Notary, counter-signed by his clerks, Thomas Mewburn and James Dove. 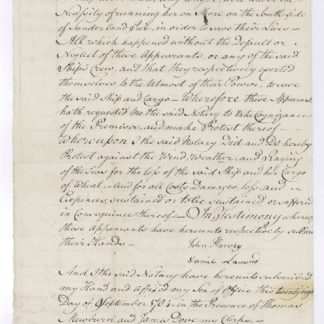