Extracts from an Arabic manuscript by a leading linguist, Egyptologist, and sinologist

Extracts from the Arabic historical manuscript "no. 689" by Joseph de Guignes, the famous French sinologist and orientalist, with notes on the history of Egypt during the years 1517-1522 and the Ottoman conquest by Sultan Selim. Guignes's notes start at f. 111 and end at f. 334 of the Arabic manuscript, which is a part of a historical work on Egypt entitled "Bada'I al-Zuhur fi Waqa'I al-Duhur". The "Bada" was written by the famous chronicler of the late Mamluk and early Ottoman period in Egypt, Muhammad Ibn Iyas (1448-after November 1522) and today is kept in the manuscript section of the French Royal library (no. 1825, ancien fonds no. 689). Guignes's extract contains numerous transcripts in Arabic script.

Today, Joseph de Guignes is best known for his "Histoire générale des Huns, des Turcs, des Mogols, et des autres Tartares occidentaux" (Paris, 1756-1758), for his unsuccessful attempts to decipher Egyptian hieroglyphics (before the 1799 discovery of the Rosetta Stone and Champollion's breakthrough), and for his theory that China was an outpost of Ancient Egypt. 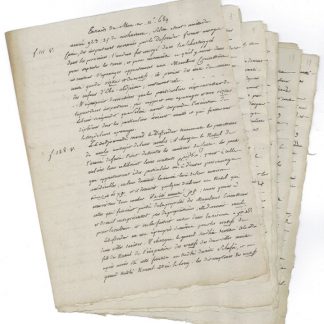