Depicting various tools for working soil, including ploughs, harrows and rolls, the lithographed illustrations give an insight into agricultural techniques used in mid-19th century Sweden. Although the volume is announced on the cover as the "first issue", no further plates were published; merely a booklet of descriptive text appeared.

Bound with these 12 plates is an additional one not called for by the table of contents, dated 1852 and hand-signed "A. Blomberg". Loosely enclosed are three sales brochures by the plough manufacturers "Radix", "Dewe plogen", and "Forsbacka" (1921 and no date), as well as an 1859 inventory of equipment found at Ladegaardsoen's farm in Christiana. Binding insignificantly scuffed. Some foxing throughout. Extremely rare; a single copy in libraries worldwide (National Library of Sweden). 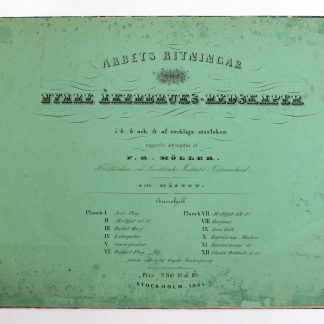