Based on drawings prepared in Constantinople

First edition. A fine series of four elaborately decorated Turkish horses, based on drawings prepared in Constantinople and sent to Ridinger by Baron Gudenus. As stated in the letter from Constantinople, dated 7 March 1741 and printed on the reverse of the title page, the Ottoman dignitaries could be distinguished by the various kinds of luxurious cloths, jewels, and finery they applied to their stables. The officials would vie with each other for the most splendid equestrian adornments, often showering their animals with gold and silver, diamonds, silk, and delicate embroideries. At a state reception in 1740, the Sultan was reported to have shown a parade of 30 horses, each covered in a different kind of precious stone. Such a horse laden with ornament, led into the seraglio by a Janissary, is pictured in plate I: four ostrich feathers adorn the head (a distinction afforded only to the Sultan's personal stable), while the chest bears a splendid rosette belt. Plate II shows a rising "Divani", such as is ridden by the Grand Vizier when dressed in state, with silver chains jingling from its halter and an embroidered blanket under the saddle. Plate III shows another Divani (titled "du coté gauche", but a rare variant imprint from front right), with different bridle and blanket; an elaborately tooled gilt thong is strapped across the chest. The final plate IV shows the "cheval de main d'un Pacha" besides a large kiosk, with a long blanket, rich silver and gemstone decoration and two leopard skins.

Some fingerstaining in the margins, but well preserved. 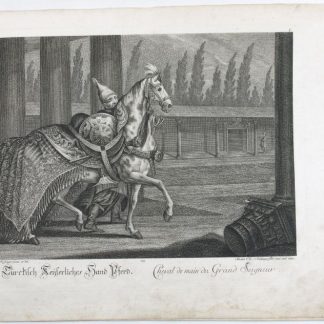