Scrap book documenting the journeys and diplomatic stations of longtime British First Secretary R. T. Callender and his wife Cécile, mainly during the 1930s and 1940s. Shows family life in Britain, Berlin under National Socialist rule, the Rhine Valley, holidays in Tyrol, stations in Bermuda and Shanghai, (some 75 images of the siege of the city and Mao's Communist invasion), Bombay, and, finally, Aden in Oman (the harbour, a military encampment, and the famous wells) and the Suez canal. Several photos have been removed without much care, leaving the album sheets torn in places. 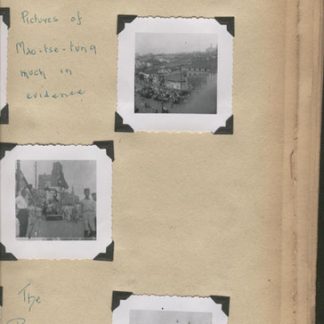