First edition, inscribed to the managing director of the "Freier Verlag" (whose name has been effaced): "[Herrn Hans Huber] / In treuer Kameradschaft / Hugo Ball". Three years previously, the author had co-founded (with Hans Arp, Tristan Tzara, and Marcel Janco) the famous "Cabaret Voltaire" in Zurich, regarded as the cradle of Dadaism. In his present book he provides a historical analysis and critique of the "idea of the German state", which he held responsible for destroying "German thought". Prophetically, he writes: "It is my steadfast conviction that the destruction of the Prusso-German arbitrary power, as postulated by President Wilson in his famous address at Mount Vernon, will not be sufficient to protect the world from another German assassination [...]. It is of the utmost importance for the envisaged League of Nations to become fully aware of the historic strength of this foiled German plot, of the moral depletion of a people that has suffered for a thousand years under to most terrible theocracy [...]". The radical Ball, influenced by the great theorists of Anarchism, had spent most of the War years in exile in Switzerland, where he died in 1927, aged 41. Presentation copies of his books are rare. 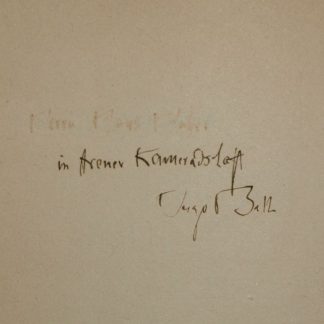