First English edition. Book 1 contains a description of Arabia, as well as of Mecca and Medina; books 2 and 3 contain Mohamed's genealogy and biography. The historian Henri de Boulainvilliers (1658-1722), translator of Spinoza's "Ethics", wrote on topics so diverse as astrology, physics, philosophy and theology, though many of his writings were not printed until after his death. For his neutral reasoning, his works were cited by subsequent writers who would prove influential in the development of Western political thought and historical research.

Short tear to title page repaired; some browning and brownstaining throughout. From the library of the British philosopher of religion, David Arthur Pailin (b. 1936), with his bookplate and copious notes laid in. 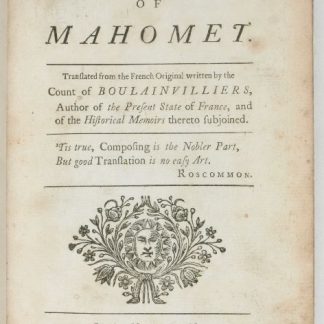