"Tell him I saw the fraudulent Abdulla, the other day. Exactly as he was, body & mind. Now, that's the way"

"Dear Lady Young I wonder if you (and His Ex.) are still there? Your letter to me sat at 2 Smith Square (Sir H. B. not knowing my whereabouts) till last night, when I called and collected it. I am sorry. Most of my addresses are like that. Would you be so good as to register / T. E. Shaw / Clouds Hill / Moreton / Dorset / as my likeliest spot, in future? It represents my cottage on the heath, which will be home after March when the RAF bring themselves, not reluctantly, to dispense with my help? I'm sorry not to have seen you. I wanted, while you were yet in Nyasa-land, to beg of His Ex. The rectangular skin of a small (1 sq. yard) lion, for my hearth-rug. But Ronald Storrs whom I saw at Southampton about a month ago told me you had been promoted to his province, and that there were no lions. Ronald was physically a very sick man. Mentally he was fighting hard to keep brisk… too hard for his health, I fear. The wreck of an old companion is too near a sight for sorrow, even. I hope Africa suits, after your trial of Asia and Europe. My respects to the Governor! Tell him I saw the fraudulent Abdulla, the other day. Exactly as he was, body & mind. Now, that's the way. / Yours sincerely TE Shaw / A poor letter: but I picture you again in Africa, and my squib spluttering in the void".

Between 1916 to 1918, Abdullah I of Jordan worked with the British guerrilla leader T. E. Lawrence (with whom he had actually never jarred), and played a key role as architect and planner of the Great Arab Revolt against Ottoman rule, leading guerrilla raids on garrisons. From 1921 until his assassination in 1951, Abdullah ruled Jordan, first as Emir under a British Mandate from 1921 to 1946, then as King of an independent nation from 1946 onwards. 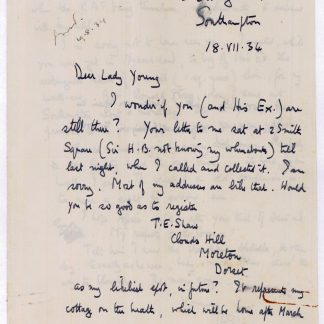