Herring, John Frederick, Sr. Portraits of the Winning Horses of the Great St. Leger Stakes. From the year 1815 to the present year inclusive.

Large folio (60 x 42 cm). Letterpress title with engraved vignette, list of subscribers, winners of the St. Leger 1776-1814, 14 hand-coloured aquatint plates by T. Sutherland and R. G. Reeve after Herring, each with letterpress description of riders and winners of other races and the St Leger stakes for each year. Bound in recent half burgundy morocco with contemporary drab boards with large printed label on upper cover.

"Extremely rare" (Tooley). Second edition of Herring's finest work, the outcome of his fascination with horse racing and the St. Leger in particular. "In the writer's estimation, the first series of the St. Leger winners contains the very best of Herring prints [...] they were engraved by Sutherland, a more competent aquatinter and colourist than his successors who handled these race-horses" (Siltzer). Herring spent the first 18 years of his life in London, where his father, an American, was a fringe-maker in Newgate Street. Having married against his father's wishes, he went to Doncaster, where he arrived during the races in September 1814, and saw the Duke of Hamilton's horse, William, win the St. Leger. The sight inspired him to attempt the art of animal-painting, in which he subsequently excelled. He painted Filho da Puta, the winner of the St. Leger in 1815, and for the following thirty-two years painted each winner in succession. "Herring's series of Portraits [...] were painted annually and quickly reproduced in large showy aquatints, the horses made literally glossy by the application of varnish to the paper" (Diana Donald, Picturing Animals in Britain 1750-1850, New Haven, CT [2007], p. 215). This is the second edition of this series of wonderful racehorse portraits. It was first published as a suite of 10 plates in 1824 by Sheardown and Son of Doncaster; S. and J. Fuller of London purchased these in 1827 and continued to publish, periodically, the St. Leger winner series up to 1845. The earlier plates were all re-captioned with Fuller's imprint. Plates watermarked 1825-28; the first plate in the present work, "Filho da Puta", is on paper watermarked 1827. 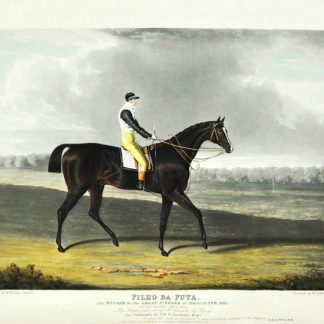