First editions of Gambano's droll classics on horsemanship featuring H. W. Bunbury's humorous caricatures: a luxury copy with the rare hand-coloured plates included with the first work. "Geoffrey Gambado" has sometimes been identified with the illustrator, but is also said to have been Francis Grose, compiler of "A Classical Dictionary of the Vulgar Tongue" (cf. Riely, "Horace Walpole and 'the Second Hogarth'", in: ECS 9/1 [1975]). In addition to his works on antiquities, satiric essays, and volumes on non-standard words and meanings, Grose (1731-91) wrote "Rules for Drawing Caricaturas: with an Essay on Comic Painting" (1788), and the frontispiece portrait of "Gambado" in the "Academy" bears an uncanny resemblance to Grose, a "stocky, corpulent figure which Grose himself caricatured" (DNB).

The stipple-engraved plates were designed by H. W. Bunbury (1750-1811), whom "Walpole enthusiastically compared [...] to Hogarth. He was the friend of Goldsmith, Garrick, and Reynolds, and the favourite of the Duke and Duchess of York, to whom in 1787 he was appointed equerry. All this, coupled with the facts that he was seldom, if ever, personal, and wholly abstained from political subjects, greatly aided his popularity with the printsellers and the public of his day, and secured his admission, as an honorary exhibitor, to the walls of the Academy, where between 1780 and 1808 his works frequently appeared [... They] are not without a good deal of grotesque drollery of the rough-and-ready kind in vogue towards the end of the last century - that is to say, drollery depending in a great measure for its laughable qualities upon absurd contrasts, ludicrous distortions, horseplay, and personal misadventure" (DNB).

"The Annals of Horsemanship" were later "published with and generally bound with" the "Academy", though always "with a separate title page" (Huth). The "Academy" seemingly wants fol. B1 of the preliminary matter, but was apparently issued that way: as the ESTC notes, "Possibly deliberately mis-signed in order to support the 'missing' portion of the author's preface - see editor's note".

Some browning and brownstaining; occasional edge tears repaired (including a largish fault to fol. M2, the edges of which are more severely frayed). From the library of the late Robert Lionel Foster, Esq. (British Justice of the Peace, d. 1952; his bookplate on front pastedown). 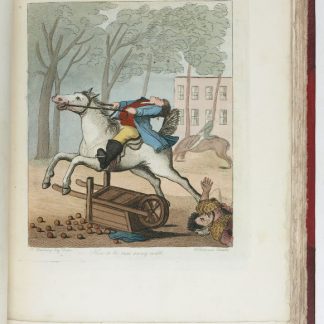