The history of the Ottoman Empire, as seen by a seventeenth century German writer

Fascinating, little-received chronographical study focusing on the history of the Eastern Mediterranean and Asia Minor, then under Ottoman rule. The anonymous late 17th-century German author hides behind the name of "Philo Chronographus" and is evidently identical with the "Philo Cosmographus" who produced the similarly themed geographical work, "Trinum Marinum", which is announced on the title page and was often issued together with this, though produced by a different publisher and catalogued separately. The first part of the work contains a general introduction which relates the 24 hours of the day to the time from Creation to the year 1800 (which is conceived of as the end of the world, leaving another mere 107 years of history to come!). The second part features a chronicle of the "Rule of the Ottoman Porte", from Sultan Osman to Suleyman II.

Numerous pages of plates (each page containing two copper engravings) depict costumes, animals and plants, maps and views of towns (Sultan Osman, the Ottoman Residence and a view of Constantinople, dolphins and cranes, Turkish ladies in their various garments, a cypress and a mastix tree, etc.).

The number of plates, and indeed even the arrangement of engravings on a single page, varies from copy to copy, but this wants 4 plates as compared to the table of plates. Well-preserved. 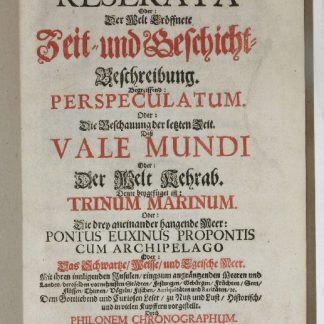