With depth soundings throughout the Gulf

The first collected edition in English, translated by John Phillips and Henry Oldenburg: an account of Tavernier's travels to Turkey, Persia, India, and Japan (with large map of Japan), containing reports about the Japanese persecution of the Christians and the Dutch settlements in the Far East. Book Two, chapter Nine of the Persian Travels is of particular interest, as it contains an account of Tavernier's voyage through the Arabian Gulf, mentioning Bahrain, Bandar Abbas, Qeshm, and Hormuz and making observations on the pearl-fishing, people and navigation of the Gulf. There is also a bird's-eye map of the Strait of Hormuz showing the Musandam Peninsula (peppered with palm trees and captioned "A promontorie of Arabia the happey"), Hormuz, Larak, and Qeshm island, as well as Bandar Abbas and Bandar Kong on the Persian side. Intruguingly, this engraved map also includes depth soundings throughout the Gulf, making it useful as an early "Persian Gulf Pilot". A separate, illustrated chapter discusses extensively the invaluable pearl in the collection of the Imam of Muscat. Another illustrated chapter discusses "The Money of Arabia". In general, the plates depict festivals, processions, costumes, views, and images of the Eastern flora and fauna as well as coins and gems. 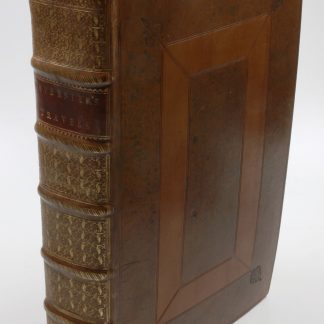 Sie sehen: Tavernier, Jean-Baptiste. Collections of travels through Turky into Persia, and the East-Indies. …London, 1684. € 16.500,00
In den Warenkorb