Cureton, William. Ancient Syriac documents relative to the earliest establishment of Christianity in Edessa and the neighbouring countries from the year after our Lord's ascension to the beginning of the fourth century.

In 1837, Cureton (1808-64), assistant keeper of manuscripts in the British Museum and the only oriental scholar in the department, was commissioned to prepare a catalogue of the Arabic manuscripts, the first part of which appeared in 1846. "But a new study had already engaged Cureton's attention. During his official occupation at the British Museum immense additions had been made to the collection of Syriac manuscripts. When he entered the department these numbered about eighty; but the accession of numerous manuscripts of the highest importance from the Nitrian monasteries, which were purchased and brought over partly by the mediation of Dr. Tattam in 1841 and 1843, raised the total to nearly six hundred. Cureton, who knew nothing of Syriac when he came to the department, set himself zealously to work to conquer the not very serious difficulties of the language, and to set in order and classify the new acquisitions from the Nitrian valley. His labours while drawing up an outline catalogue were amply rewarded by the discovery of many manuscripts of the highest interest" (DNB). The present work was published, after his death following a railway accident, by William Wright (1830-89).

Occasional slight foxing; on the whole an excellent, unusually wide-margined copy. From the library of the Ducs de Luynes at the Château de Dampierre: their bookplate reproducing the arms of Charles Marie d'Albert de Luynes (1783-1839), 7th Duc de Luynes, on pastedown. 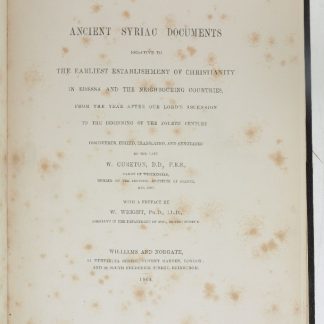