An enormous fleet against the "Tyrant of the Turks"

[Sixtus V, Pope (1521-1590)]. Manuscript draft for an Apostolic constitution regarding his third bull.

Variously revised draft for a Papal decree, asking the cardinals and others to raise monies for the Church to fight the Turks as well as other heretics: "Sixtus V, in order to better govern the Church and safely protect it from all dangers, judges that the Church needs a larger amount of money. The first year the pontificate had 100,000 gold coins, as did the second, to make 1,000,000 gold coins to be guarded in the safe of the Castel Sant'Angelo. In order that they be safely guarded, two constitutions have been issued and an enormous fleet is to be prepared, as the Tyrant of the Turks as well as heretics and schismatics are a threat to the bark of Saint Peter, and large numbers of people are eager in both France and Germany to defend against the enemy. Sixtus V orders his dear brothers, the Cardinals of the Catholic Church, to bring the Holy See another 1,000,000 golden coins, and advises them how to collect the money and the divisions to be made among them for doing so, how often to pay, etc. [...]". As comparison with the final version shows, the present text underwent further editing, and not all changes here drafted made it into the final text. 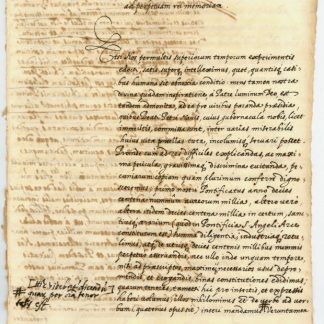