First Italian edition of the "Taqwim al-Tawarikh", an annalistic chronicle from the creation of Man to the year 1648, when it was composed by the famous Turkish polymath Katib Chelebi (1609-57). This is, at the same time, the first printing of any work of Katib Chelebi's in any language: the chronicle was not published in the original mixture of Persian and Ottoman Turkish until 1733, by Müteferrika. "[T]he work originated as an excerpt of [Chelebi's previous effort,] 'Fazlakat aqwal al-ahyar', but continued up to Chelebi's own time [...] Becoming highly popular as an easy reference work, it was continued after Chelebi's death by several authors, including Hüseyin Hezarfenn, Seyhi, and Ibrahim Müteferrika, who published it as the twelfth product of his press [...] Equally popular in Europe as a reference work, it was translated into Latin, Italian, and French. Today, the afterword is the main part of interest, as it contains a brief discussion of the regularities or laws of history, and an initial elaboration of his ideas of causation in history, which are later copies by Na'ima (d. 1128/1716) in his theoretical discussion" (Kafadar, Karateke, Fleischer: Historians of the Ottoman Emprire, s.v.).

Bound before this are two other rare Venetian works of the late 17th century, namely a single-volume reduction of the "Jus Canonicum" (1674) by the Bavarian Jesuit Pirhing (1606-79), and the second edition of an instructional dialogue between a Catholic and a heretic by the Venetian jeweller Moretto (first published in 1647). Some brownstaining and waterstaining; a few edge and corner flaws. Last leaves rather wrinkled, lacking lower flyleaf. 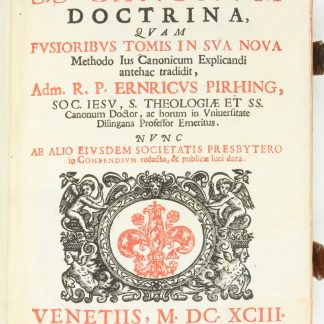