A passage journal kept aboard the ship "Oriental" from London around Africa to Bombay between 6 January and 30 May 1846, written in a neat and clear hand with occasional coloured ink sketches. The varied content includes weather observations, poetry, and day-to-day commentary: "March 31st 1846 Tuesday: A large shoal of porpoises playing about the bows the mate went out on the dolphin striker to harpoon one but was unsuccessful [...]", "May 11th 1846 Monday: This morning we sighted Coëtivy, it is a low rocky shore sprinkled with Cocoa nut trees etc., before 12 it was out of sight [...]" (includes a panoramic sketch of the coastline).

Lieutenant William Collingwood, a distant cousin of the Admiral, was an R.I.N. surveyor who did much valuable work in Iraq, including the large-scale, though surreptitious, mapping of Baghdad in 1855. During this same expedition, Collingwood also surveyed the Shatt-ul-Arab, the city of Bussorah (also by stealth) and much of the country between the Tigris and Euphrates Rivers, and he was undoubtedly one of the most gifted and productive R.I.N. surveyors of his day. 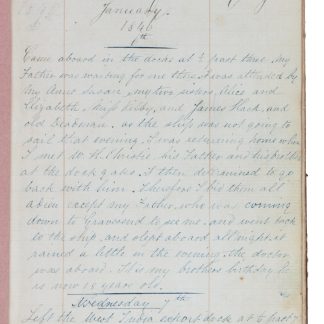