Della Valle's travels in the Near East, Persia and Arabia: "one of the finest works of travel literature" (Howgego)

First edition in German of Pietro della Valle's deservedly famous narrative of his travels in the Middle East, with an excellent account of Muscat and the Arabian Gulf and references to Dibba. Della Valle, an Italian nobleman, sailed from Venice in 1614 to Istanbul, where he arrived in August 1614, spending a year to explore the city. He continued to Rhodes, Alexandria, Rosetta, Cairo, crossing the Sinai desert to Jerusalem, Damascus and Aleppo. From there Della Valle proceeded to Isfahan (Iran) to meet the Safavid ruler Shah Abbas I. He sojourned in Persia until early 1623, witnessing and commenting on the escalating conflict between Shah Abbas and the Portuguese empire. In 1621 he decided to return to Europe and set off for the Persian Gulf, but the Persian and English blockade prevented his sailing. By way of India he finally sailed for Muscat in January 1623, from which he crossed the Arabian Gulf to Basra, continuing overland to Aleppo, arriving in Europe in 1626. During his travels he wrote regularly to his learned friend in Naples, Mario Schipano. These 54 letters formed the basis of an account of his travels that was first published in Rome as Viaggi di Pietro della Valle from 1650 to 1658. "Della Valle displayed excellent narrative and descriptive skills, powers of acute observation, and a genuinely scholarly breadth of learning. He refused to comment on what he had not witnessed himself or checked against the best authorities [...] Della Valle's eighteen letters from Persia provide one of the most detailed sources of information for most aspects of Persian life in the second half of Shah Abbas' reign" (Gurney).

Engraved armorial bookplate on paste-down. Evenly browned throughout, some spotting, few quires in volume 3 with wormholes in gutter margin, not affecting the text, otherwise in very good condition. 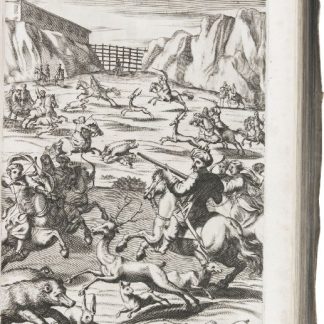