Shurreef, Jaffur (Ja'far Sharif). Qanoon-e-Islam, or the Customs of the Moosulmans of India; comprising a full and exact account of their various rites and ceremonies, from the moment of birth till the hour of death.

First edition of this very rare study of Indian Muslim customs, manners, social habits and religious rites. At the request of the British-Indian surgeon Gerhard Andreas Herklots (1790-1834), the work was composed in his native Dakhini by the "liberal-minded" Ja'far Sharif and then translated by the editor. Subsequently published under title "Islam in India, or, The Qanun-i-Islam; the customs of the Musalmans of India". 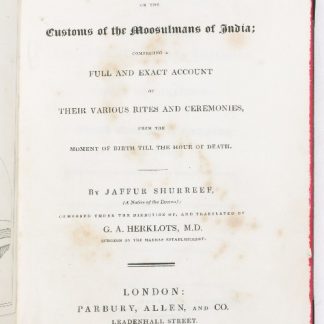