A Christian Arabist discussing a planned archaeological expedition to Palestine

Folio. (4). 67, (1 blank) pp. With a woodcut coat of arms of the province of Friesland on the title-page, 1 woodcut headpiece, 1 woodcut tailpiece (plus 2 repeats) and 4 woodcut decorated initials (2 series). Set in roman and italic types with a few words of Hebrew. Modern boards, covered with grey paper, red and blue sprinkled edges.

First and only edition of an inaugural lecture by Samuel Hendrik Manger (1735-1791), appointed ordinary professor of oriental languages and of Hebrew antiquities at the University of Franeker in 1760. Partly under the influence of the orientalist Albert Schultens, Manger valued Arabic studies for the insights they gave into Old Testament scholarship. In his present inaugural lecture, he discusses the controversial expedition to Palestine that several scholars were planning to make in that year. It shows his interest in archaeological research carried out in expeditions instigated by the German scholar Johann David Michaëlis. Manger believed they would inaugurate a new era in Biblical scholarship.

In very good condition and with very large margins, with only some minor marginal foxing in the title-page and an occasional unobtrusive small stain. 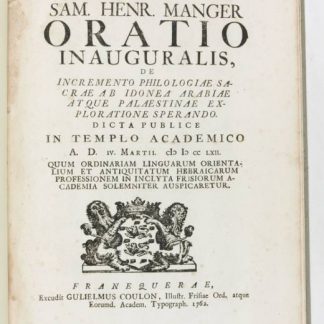