8vo. 2 volumes bound as one. (10), 125, (3) pp. (2), 154 pp. With an engraved folding frontispiece view (of Yedikule fortress in Istanbul) and 3 engraved maps (2 large folding), the view coloured, 1 map with the Ottoman-Persian border coloured in blue and red, and all three maps with the route coloured in red. Further with decorated rules on the title-pages. Set in fraktur types with incidental roman. Mid 19th-century boards covered with chemical-marbled paper, sewn on 3 recessed cords, with the arms of Friedrich Wilhelm IV, King of Prussia (crowned eagle, with the Order of the Golden Fleece) in gold on the front board, printed spine-label in sans-serif type.

First and only German edition of Griffith's account of his journey (leaving England in 1785) from Smyrna (Izmir) through the Dardanelles to Constantinople (Istanbul) and back by ship, then from Smyrna overland through Turkey and (after crossing the corner of the Mediterranean) from Antioch via Aleppo and by caravan across the desert in what is now Syria and Iraq to Basra. On his return trip by ship he visited Muscat, which he also describes. For most of the journey he travelled disguised as a "poor Greek", allowing him to see people, especially in the poorer layers of society, with an intimacy not possible for most European visitors. Griffiths, a British (Edinburgh?) medical doctor, first published his account in English in 1805 as Travels in Europe, Asia Minor and Arabia. The author notes that he limits himself to "faithfully describing such things as he saw, the scenes in which he participated, and offering ... reflections which resulted from the impressions", avoiding second-hand accounts, speculations or borrowings from other publications. Although he in fact sometimes borrowed accounts of parts of Turkey published by his friend William Eton in 1798, much is reported first-hand, including his extensive travels in Anatolia and beyond. He is unabashedly critical of the Turks and the French (the English edition was published one year after Napoleon declared himself Emperor and while England and France were at war) but shows admiration for the Bedouins, noting their honesty, "liberality, kindness, and strict regard for their engagements". He describes the use of opium and tobacco, coffee houses, bazars, puppet shows, clothing of the men and women, cookery and the daily life of common people. At Muscat he saw beautiful Indian girls performing a nautch dance, which initially disgusted him, though he notes that more intimate acquaintance with the music and dance turned him into a nautch admirer. Part of the journey was made in the company of David Hays, English merchant and consul at Aleppo, his seven-year-old daughter Marianne (who spoke Arabic, Greek, French, Italian and English fluently) and an Armenian servant. Hays died during the journey around 1786 and Griffiths continued with Marianne to Basra where he arranged for her return to her mother in Aleppo, where she later married the British consul. The three maps show a detail of the Dardanelles, Asia minor, and the regions between the Mediterranean and the Gulf, each with Griffiths' route coloured in red and the last indicating with the boundary between the realms controlled by the Ottoman and Persian Empires (at this date running from the Gulf through Kurdistan) coloured blue on the Ottoman side and red on the Persian side.

With a contemporary black ink owner's stamp (oval with script "Beyer") at the head of the first text page and foot of last text page; arms on the binding of Friedrich Wilhelm IV (1795-1861), King of Prussia from 1840 to 1861; later 19th-century red ink stamp (round) of the Royal Library in Berlin on the back of each title-page; and a blue ink stamp (rectangular, in Russian) of the All-Union State Library of Foreign Literature in Moscow, established in 1921, on the back of the first title-page. With a small gap at the foot of the folding view running 2.5 cm into the image (1.5 mm wide at the edge of the image: fold shaved by the binder), a chip in the gutter margin of the second title-page and occasional minor stains, but otherwise in good condition. Binding somewhat rubbed, and spine damaged at the head and foot. Account of a 1780s journey through Turkey and the Middle East to the Gulf and back via Muscat. 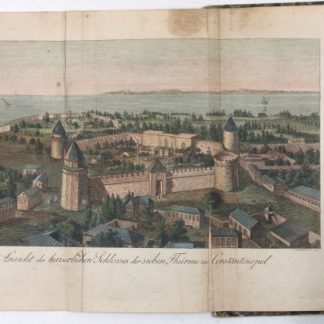