"Ode to the Persian Gulf"

Irwin, Eyles. A Series of Adventures in the Course of a Voyage up the Red-Sea, on the Coasts of Arabia and Egypt; and of a Route Through the Desarts of Thebais, Hitherto Unknown to the European Traveller, in the Year MDCCLXXVII. In letters to a Lady.

Second edition (the earliest mentioned). Irwin relates the series of misadventures which occurred on his journey back from India after his dismissal from the East India Company. Following the near wreck of his ship he was taken prisoner by Arabs who took him to the Nile, whence he travelled to Cairo on his release.

The East India Company servant Eyles Irwin, born in Calcutta in 1751, was appointed to survey the Black Town in 1771 and "was made superintendent of the lands belonging to Madras [...] In 1776 he became caught up in the political storm that overtook the governor of Madras, George Pigot, who was placed in confinement by members of his own council. Irwin supported Pigot, and in August he was suspended from the company's service. Early in 1777 he left India in order to seek redress in England. Irwin later published an account of his journey home, which was entitled 'A series of adventures [...]'. In this he displayed his classical education and described his experiences and observations during the journey, which lasted eleven months [...] Irwin returned to India in 1780 as a senior merchant and his route was again overland, but this time via Aleppo, Baghdad, and the Persian Gulf" (ODNB). The author recounts his imprisonment in Yanbu, Arabia, and further voyage to Jeddah, as well as his adventures in Egypt, his journeys through the Peloponnesus and Balkans as well as Persia. He includes an "Ode to the Persian Gulf", which extols the beauties of Bahrain. In 1802, Irwin was to produce a musical play, "The Bedouins, or Arabs of the Desert: a Comic Opera in Three Acts" (1802), which played in Dublin for three nights.

The plates include views of the town of Mocha (al-Mukhah) on the shore of the Red Sea in Yemen, including its early mosques, and of the Straits of Bab al Mandab ("Babelmandel"). Also shown is a detailed view and chart of Yanbu, the port giving access to al Medina. 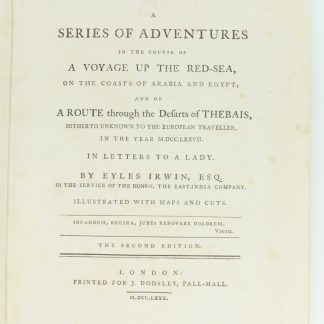