In the present letter, Dr. Rauch requests permission to visit Pasteur's laboratories to examine the discoveries made by one M. Gamaleia in hopes of making a contribution to his work and that of Pasteur. Rauch explains he has had extensive experience with diseases in warm countries, citing two cholera epidemics in Toulon and Algeria, and proceeds to list his medical qualifications. He notes he would particularly like to participate in M. Gamaleia's experiments in the endemic field and feels confident that the Minister of the Navy will release him to do so, if accepted. At the foot of the third page of the letter, Pasteur replies in full from Arbois on 12 September 1888: "Honoured Sir and Doctor, As soon as Monsieur Gamaleia has returned to Paris I will hasten to communicate your interesting letter to him. The latter is dated from Lisbon; are you returning on the Brest route, and when? Would you be able to come and see me on your way to Paris where I would perhaps have already returned? We could talk without too much inconvenience to you, about your wishes. Yours truly, L. P." (transl.). A further note in Pasteur's hand is found at the head of the first page of the letter: "To be shown to M. Gamaleia as soon as he arrives. L. P. 12 September 1888". 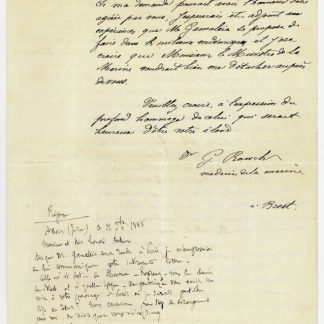