The latest and by far the best edition of the Cosmographia, with 68 new maps

Folio (265 x 398 mm). Engraved allegorical title (with a portrait of Sebastian Münster within a cartouche at the bottom by Mathäus Merian), (24), 1752, (12) pp. Title-page printed in red and black. With 26 double-page woodcut maps, woodcut portrait of Münster on verso of title-page, 72 double-page woodcut maps, plans and views, and about 1500 smaller woodcut illustrations of maps, plans, views, plants, animals, monsters, etc. in the text (including repeats). Contemporary vellum. All edges red.

A fine, tall, and very clean example of the final, largest and most important edition of Münster's monumental work. The "Cosmographia" by Sebastian Münster (1488-1552), a German cartographer and cosmographer, was one of the most successful and popular books of the 16th century. The most highly valued of all cosmographies, it passed through 24 editions in 100 years and was of paramount importance for the revival of geography in 16th-century Europe. The present copy is of the last German edition, the best and most extensive one. It contains the newly cut woodblocks by Sebastian Petri in the "copperplate style" after the corresponding maps in the pre-1587 editions of Ortelius's "Theatrum". This includes the famous map of Sumatra with the inset of an elephant that had been moved from the map of Ceylon in the 1540 edition, as opinion shifted to make Sumatra the preferred candidate for the island of "Taprobana". Furthermore, 68 other maps and plans were published here for the first time. The famous map of Europe in the form of a queen (after Bucius 1537) appears on the verso of fol. E3.

In very good condition, with remargined paper (and some text) loss to the last leaf but one of the index at the end (but supplied with a replacement from a smaller copy of the 1614 edition). The best and most extended edition of the Cosmographia. Provenance: removed from the library of Ericsberg Castle near Katrineholm, Sweden, built for the Swedish statesman Erik Karlsson Gyllenstierna (1602-57), in the 1650s (two engraved views of the castle, from Dahlberg's "Suecia antiqua et hodierna", are laid in; several annotations in Swedish on the pastedowns). 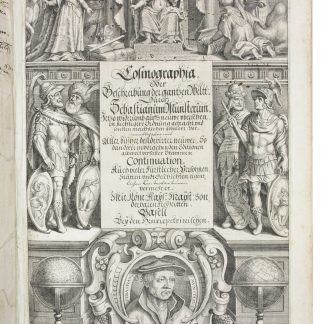